I’m a sculptor-drawer and i’m living in a region called Vendée (France). After 2 years in a drawing school, i decide to work as a freelance artist and to make books and comics for children.  I look for a publisher for my books projects but as it is very difficult to find one, i decide at the same time to test sculpting stuff.  In 2007, i come across a BJD site (Ball Jointed Doll). I fall in love with these strange dolls and that stimulates my creativity. I try then to create my own bjd doll even if the first attempts are not very successful.  Finally, i present my first bjd called XB12 at the Ldoll festival in Lyon in 2011. Further to good feedbacks on my work, i decide to go on with dolls and monsters. I create Bactro in 2012, Feldspathe and Ambroise in 2013, Pollen in 2014, Little radish in 2016 and a mini Bactro in 2017. 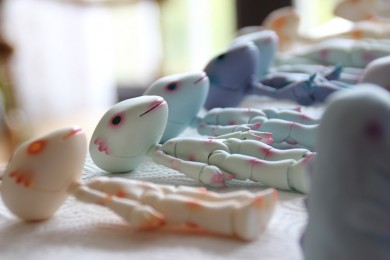 I love sculpting too strange and oniric creatures. I would like to spend more time on these kind of sculptures because it’s a so great way for imagination.

In the meantime, i gather together all my creations under the “Creatures Dolls” name: that’s what i want to show in my works, the strange and weird scope of imaginary world ; that’s the most interesting for me, it really stimulates my brain ^__^ 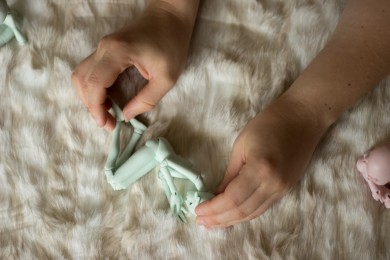 Since 2017, i follow an apprenticeship with a tattoo master ; that’s why i can not spend all my time now on dolls and other creations. But i don’t want to stop to create things, so i will try to create some dolls in the future, at my own pace ^__^